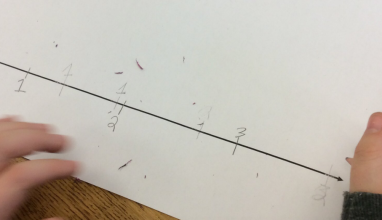 My second grade students just started a unit on decimals.  Based on the pre-assessment, most students have no problem with identifying the value and place value position of digits in the ones – hundred-thousands place.  It’s a different story for numbers to the left of the decimal point.

Earlier in the week students explored the tenths and hundredths place.  Students connected money concepts to place value and fractions.  They compared 1/2 with 0.50 and $1.50 with 1.50.    They completed similar activities where they needed create benchmarks on number lines and place numbers.  Some were still having trouble and I believe this is partially due to exposure.  Also, I was finding that their were issues with spatial awareness.  Students were looking placing able to approximate benchmarks of half, but placing 0.1 close to the half.  Student practiced using number lines and using benchmarks.  The most tricky piece was looking at the differences between the hundredths and thousandths.  This challenge reminded me of how students develop an understanding of the magnitude of numbers.

Today I grouped students into teams and they used dice to create different decimals.  The decimals ranged between 0 and 3.  Students were given a horizontal and vertical number line on a 11 by 17 paper.  This gave students room to work.  The two number lines were different sizes.  An indicator line was placed at the beginning and end of each line. After students created their decimals they started to place benchmarks.  Some students had to get out the erasers as realization set in that the maximum would be three instead of two.  Students also reevaluated their benchmark placement.  Groups noticed that the two number lines were different sizes and had to adjust their benchmarks accordingly.  I found it interesting that some students used the vertical number line top down, while other went bottom to top. 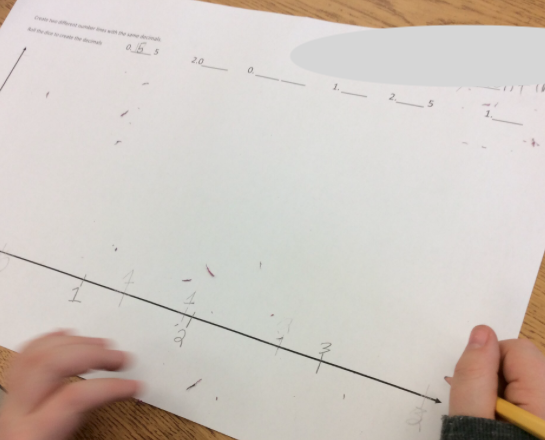 We’ll be reviewing the number lines on Monday.  I’m looking forward to the discussion and we might even break out the rulers to evaluate the reasonableness between benchmarks. 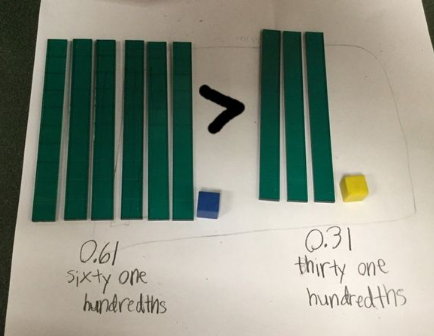 My third grade class is learning about decimals. Students have been identifying place value positions up the hundredths place. So far students have been successful in decomposing numbers into expanded form and using base-ten blocks to compare decimals.

Comparing decimals between the tenths, hundredths and thousandths proved challenging.  I was finding that some student were perceiving that a larger number indicates a greater value (0.1 compared to 0.09). I asked students to place decimals on an actual number line. This was where we ran into a few problems. There was a disconnect between comparing decimals with symbols and comparing them on an actual number line. Students understood how to use the greater, less than and equal sign but became confused once hundredths were introduced. After running into this issue multiple times, I was starting to find that some students could compare decimals, but didn’t understand where to place them on a number line.  Then maybe they didn’t understand the value in relation to a number line?

The next morning I ate my breakfast and paged through Teaching Student-Centered Mathematics, a book that I’ve been using this year.  This resource is a gem and I highly recommend any middle school or even upper elementary teachers to add it to their inventory. After reviewing a few a few different options I came across an activity from NCTM (page 151) that was placed in the book. I thought this might be a worthwhile activity for my third graders. The project asked students to place decimals on a number line between 0 – 1. The project also asked students to explain why they placed each number in a specific location.  I thought this might be a good way to assess whether students can translate their value of a decimal to a number line.   That morning I asked students to use dice, create a number line and explain why they picked each point on the line.

I collected the projects and had to reevaluate whether to proceed with the next lesson. Some students knocked it out of the park with some fabulous answers, while others needed some work. Regardless, it was the high-quality feedback that I was looking for and I was able to quickly address misconceptions.  That was an #eduwin situation. 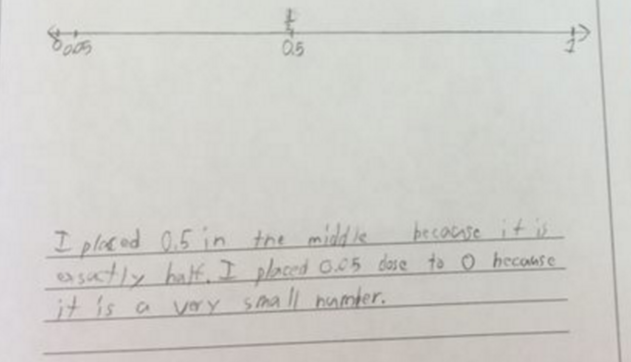 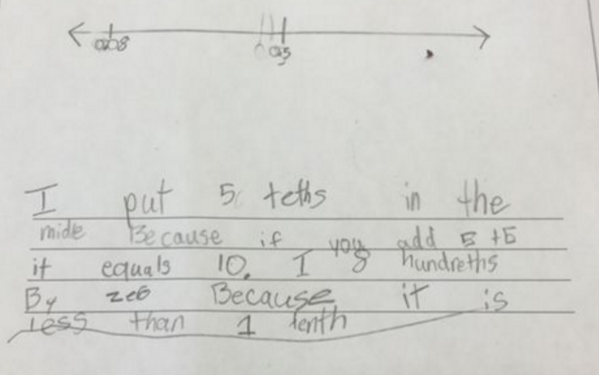 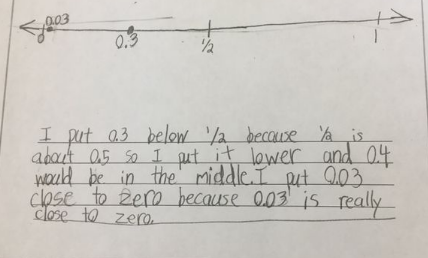 Next week students will be adding and subtracting decimals.  That should be interesting as my students use the partial-sums and traditional algorithms.

Educational Aspirations is licensed under a Creative Commons Attribution-NonCommercial-NoDerivs 3.0 Unported License. This blog consists of the individual thoughts of Matt Coaty. They do not reflect the ideas, philosophies or practices of my employers. Permissions beyond the scope of this license may be available at mcoaty1 at gmail dot com.
Loading Comments...
Comment
×
<span>%d</span> bloggers like this: