One of my classes is in the midst of a unit on ratios.  Students have been exploring equivalent ratios and using visual models to compare them.  For the most part, it has been a great journey and students are making connections.

One of the common themes of this unit is for students to apply their understanding of ratios in real-world settings.  On Thursday, I introduced an activity about cereal and flavors.   This was my first time using this task so I wasn’t quite sure of what to expect.  Basically, students are given four different cereal recipes.  Each recipe has a certain number of cups of blueberries and cornflakes.

The ratio is different for each cereal.  For example, cereal A has 1 cup of blueberries and 2 cups of cornflakes.   Students are then asked questions related to doubling, halving, making additional cups, and finding equivalent ratio recipes.   Students seemed to struggle at first and then created models, mostly tape diagrams, to find solutions.  Questions about making a certain cereal taste more like another were also part of this task.  Students had to stretch their understanding of ratios and apply it here. What I found was that some students struggled through this process.  Through the struggle, they moved towards using pictures/models to help themselves.

This was where I stayed back and let students work.  That was tough. At times, I asked students questions to help move them towards validating their reasoning.  The application piece of taking ratios and using that understanding to see whether a cereal would taste more like blueberries or cornflakes was challenging for students.  They had to perceive the problem in an abstract sense, and then bring justification to why it would taste a certain way.

One of the more open-ended problems involved a taste test.  Students were asked to create a cereal with a  stronger blueberry taste than all the other cereals.  The kicker was that the new cereal couldn’t have more blueberries than cornflakes.  So, students were required to analyze all of the ratios and create a new ratio where the blueberry taste was more evident.  I observed that students tackled this problem in a couple different ways.  Some students perceived the problem as adding more cups of blueberries than any of the other cereals.  This caused an issue as the ratio wasn’t dependent on the amount of cups, but the actual ratio.

This was a red flag to me as students were looking at the value, not necessarily the ratio.  Other students took each ratio from the initial cereals and converted them into fractions.  They then created a fraction that was closer to one compared to the other cereal. This was used in their justification.

This task seemed like a worthwhile activity.  I’m looking forward to what tomorrow brings. 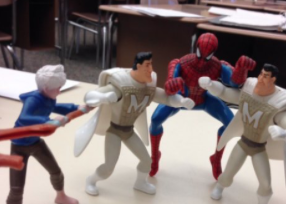 My fifth graders are in the middle of a unit on ratios and proportions.  Two weeks ago the fifth grade kids worked through a detective mystery.  It was a good start and a decent opportunity for students to explore proportions.  This week my students came back from spring break.  It took a while to get back to our regular schedule after a week off. We had to complete some review on Monday and started a new project today.  I was meaning to start it before break but we ran out of time.  I researched a few different sites (1,2,3) and decided to modified my original project.

The class began by talking about proportions and scale models.  The discussion lasted around five minutes and then we reviewed the concept and vocabulary with a Kahoot  The majority of kids were able to answer the questions using estimation, but many were challenging, which was good because we were able to stop and use different strategies.  Most students wanted to cross-multiply for everything, but by the end of the activity students were starting to see the value in diversifying their strategies.  I felt like spending time on this was worthwhile.  This experience reminded me of a Tweet from #msmathchat from last night.

A3: Trick to proportions is understanding relationship in #s. 1 situation can create more than 1 proportion & still be correct. #msmathchat

They then measured their own dimensions with a partner and compared them to the action figure. 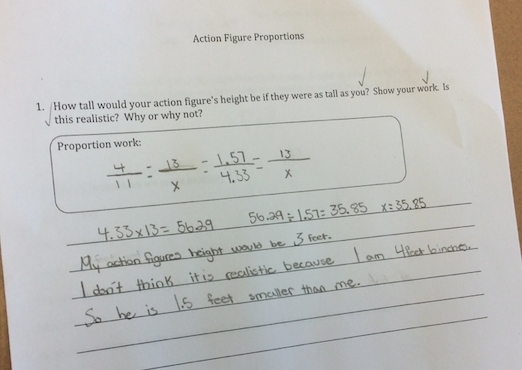 Many of the students were able to use proportions as a tool to find a solution.  Some students had a bit of trouble tackling the issue of converting the units.  Overall though, students are becoming better and using different strategies to solve proportion problems – an #eduwin in my book.  You can access the files that I used for this project here.