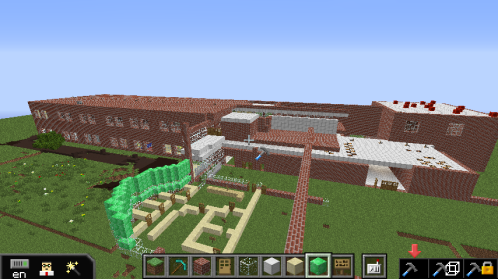 My school’s first elementary Minecraft club ended this week. It’s been quite a journey since January. The club started back in January with 25 students in grades 3-5. 11 weeks later the club concluded. Mary, Tara and I sponsored the club this year. This post is designed to show the progression of the club.

Students were placed into different teams. Some groups had two students, while others had three. Each team was asked to build a certain room in the school. The teams started on the first floor of the building since the foundation was built prior to the first session. Students went to the rooms that they were asked to build and took pictures. They took the pictures back to the classroom and started to build. Students built the rooms with the blocks available in MinecraftEdu. Students used their background knowledge to combine blocks to create desks, chairs and tables. Students placed sign posts outside of the areas of the school that they created.

The second session involved a bit more structure in the building process.   I started to find that some of the rooms were starting to look vastly different than others. Carpet, tiles, ceiling and outer walls were different blocks. The teachers decided to give student teams rubrics that allowed consistency across the school.  It also gave students a clear objective of what was needed for particular areas. 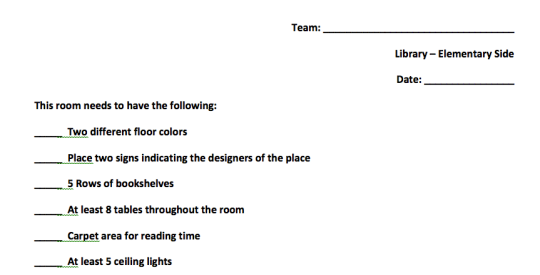 The ceiling, walls and window placements were the same in all the classrooms. Students were given opportunities to create the classrooms based on the current setup. Teachers checked the team rubrics and gave them new ones. The entire first floor of the school was constructed during the first six sessions. Two teams were asked to build staircases to the second floor of the school. Another team worked on the gymnasium, which included two stories and the roof. Once the staircases were built, teams started to work on the second floor classrooms.

Student teams were switched. The second floor was completed quicker since students were used to the format of the first floor. During this time students continued to visit different areas of the school first, and then build it in the virtual world. Teachers continued to check off completed rubrics. Some of the areas of the school were larger and took more time to complete. One team worked on the front entrance of the school. This included pathways, landscaping and creating roads. Another team designed the back of the school, which included a playground and parking lot.

The cafetorium (yes that’s right, a cafetorium and auditorium combined) took a tremendous amount of work. Four different teams worked on this as it was two stories tall. The media center was also created during this time. Students added their own creative touches to these places by putting in murals, dispensers and lights. It was amazing to see how students hid electrical lines through the use of redstone.

There were a few hiccups. Being a brand new club we all were learning after each session.  Around session three students started using potions. This caused issues as haste and invisible potions were thrown around. I had to freeze students during this time to address the use of potions. It was addressed one other time later in the club, but it was a minor issue. Also, some students inadvertently broke blocks. This caused a few issues but they mostly ended up with apologies because of a misunderstanding.

The last session was designed for students to review their progress. Students completed a scavenger hunt in the newly built virtual school. Most of the students were able to complete around ¾ of the scavenger hunt. The club ended and a video was sent out to the parents.  The club and video was well received by both the parents and students.  The team is looking forward to building on this success at some point next year.

3 thoughts on “Our Minecraft Club”