My school’s first elementary Minecraft club ended this week. It’s been quite a journey since January. The club started back in January with 25 students in grades 3-5. 11 weeks later the club concluded. Mary, Tara and I sponsored the club this year. This post is designed to show the progression of the club.

Students were placed into different teams. Some groups had two students, while others had three. Each team was asked to build a certain room in the school. The teams started on the first floor of the building since the foundation was built prior to the first session. Students went to the rooms that they were asked to build and took pictures. They took the pictures back to the classroom and started to build. Students built the rooms with the blocks available in MinecraftEdu. Students used their background knowledge to combine blocks to create desks, chairs and tables. Students placed sign posts outside of the areas of the school that they created. 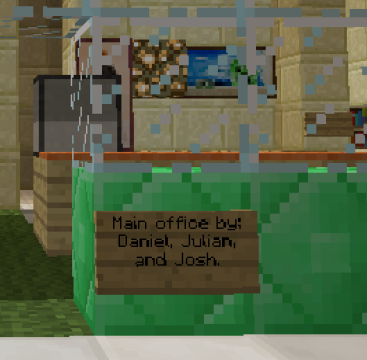 The second session involved a bit more structure in the building process.   I started to find that some of the rooms were starting to look vastly different than others. Carpet, tiles, ceiling and outer walls were different blocks. The teachers decided to give student teams rubrics that allowed consistency across the school.  It also gave students a clear objective of what was needed for particular areas.

The ceiling, walls and window placements were the same in all the classrooms. Students were given opportunities to create the classrooms based on the current setup. Teachers checked the team rubrics and gave them new ones. The entire first floor of the school was constructed during the first six sessions. Two teams were asked to build staircases to the second floor of the school. Another team worked on the gymnasium, which included two stories and the roof. Once the staircases were built, teams started to work on the second floor classrooms.

Student teams were switched. The second floor was completed quicker since students were used to the format of the first floor. During this time students continued to visit different areas of the school first, and then build it in the virtual world. Teachers continued to check off completed rubrics. Some of the areas of the school were larger and took more time to complete. One team worked on the front entrance of the school. This included pathways, landscaping and creating roads. Another team designed the back of the school, which included a playground and parking lot.

The cafetorium (yes that’s right, a cafetorium and auditorium combined) took a tremendous amount of work. Four different teams worked on this as it was two stories tall. The media center was also created during this time. Students added their own creative touches to these places by putting in murals, dispensers and lights. It was amazing to see how students hid electrical lines through the use of redstone.

There were a few hiccups. Being a brand new club we all were learning after each session.  Around session three students started using potions. This caused issues as haste and invisible potions were thrown around. I had to freeze students during this time to address the use of potions. It was addressed one other time later in the club, but it was a minor issue. Also, some students inadvertently broke blocks. This caused a few issues but they mostly ended up with apologies because of a misunderstanding.

The last session was designed for students to review their progress. Students completed a scavenger hunt in the newly built virtual school. Most of the students were able to complete around ¾ of the scavenger hunt. The club ended and a video was sent out to the parents.  The club and video was well received by both the parents and students.  The team is looking forward to building on this success at some point next year.

A few weeks ago my students started using MinecraftEdu during math class.  You can read about our first experiences here.  I used a similar activity with my fourth grade students this Friday.  Students were expected to build a house in MinecraftEdu.  Students followed these instructions.  During the process students will be practicing measurement skills related to fourth grade  math standards.

Additional components were added to the project.  Instead of working in teams, students built their own houses.  I also added blanks for students to show their number models and other information.  What I found more interesting this time around was the strategies that students seemed to use.  Students started with the first direction:

Students tried a number of different strategies.  Some students started laying out blocks in a square pattern and decided to multiply that measurement by four.  Other students created a rectangle and then eliminated blocks to match the measurement.  I would say that the majority of students had to use trial and error to create a perimeter that matched the criteria.

Some students decided to create dimensions that met the area criteria first and then addressed the perimeter.  Almost all the students had to break blocks and change what they originally made. 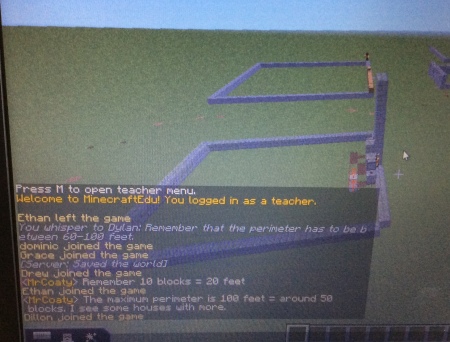 Next week students will revisit this project and continue to work on the interior.  At some point roads or paths will be created to connect this community.  Additional math skills will be added as the class continues to create this virtual math world.  I can see angles, volume

Earlier in the school year a group of three teachers at my school wrote a grant expressing the need to incorporate Minecraft in the classroom. The idea actually started last summer when a colleague and I attended a professional development event in Downers Grove. During one of the sessions I met two teachers from nearby school districts that used MinecraftEdu in a school club. What they had to say caught my interest and two other teachers and I decided to start a school club in 2016. We wrote the grant and it was accepted. Last week the licenses were purchased and I’ve explored the potential of using the program in the classroom setting.

Before the school year started I knew very little about how to use Minecraft. I decided to purchase a copy and explore the Minecraft world over the summer. I quickly learned the controls and watched a number of YouTube videos to become a better rookie. I’m still a rookie. I found the MinecraftEdu community online and started posting questions to the forums. Moderators answered my questions and I started feeling more comfortable using the program on my own. The forum has been especially valuable in giving me ideas to use in the classroom.

I downloaded a few world templates and started brainstorming. I then bounced a few ideas off of colleagues and decided to start using the program for a math scavenger hunt. The goal was to have students get used to using the program in an education setting while reviewing fraction math concepts in the process.  Most students already understood the controls and the game but weren’t used to using it for a different purpose.  I wanted to start simple and I thought a scavenger hunt would be an easy way to start incorporating the program in my math class. 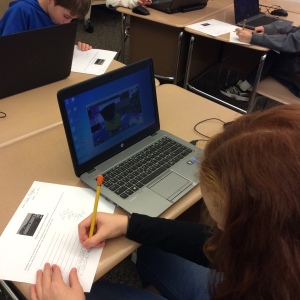 Students entered into the fraction world that I created.  Once they entered into the world I froze all of them. I explained the goal of the world and answered questions. The goal was to explore the world and find the signs that were posted. Students were using the MinecraftEdu version where they weren’t able to build or keep inventory of items. Trap doors, caverns and bridges were all part of this simple world. Each sign had a particular math problem on it and students were expected to solve the problem. I then passed out a sheet that went with the scavenger hunt. The sheet had spaces for students’ number models and solutions.

I then unfroze the students and they were off to the races. Students split up and started exploring the area. They soon found that working in teams seemed to be more efficient in finding the signs. All students were finished with the scavenger hunt in 30 minutes. Afterwards the class reviewed the answers.

I created a completely flat Minecraft world for this activity. Students were grouped into teams and given a task related to concepts that we’ve been discussing. The fifth grade class has explored area and perimeter and will eventually be investigating volume in January. Each group was asked to create a building that met a certain criteria. It was stated that each Minecraft “block” was exactly 2 feet on each side. Those measurements were used to meet the criteria.

Students worked together and started building their houses. A few groups had to restart as they found out that the perimeter and area didn’t meet the criteria. After around 30 minutes students are about 50% complete with their houses.  I’m assuming that another 30-40 minutes and the students will be finished with their projects.  At some point after break the class will be presenting their buildings to the class.

In January my school will be offering a Minecraft club to around 25 elementary students. We’re planning on building our actual school from scratch using some type of scale model. The students are already excited to be using this program in school and I’m looking forward to what students create and the process involved in that creation.