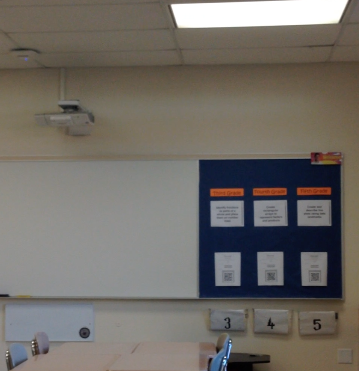 Three days are in the books. Students arrived on Wednesday and it’s been organized chaos for the last few days. Maybe not organized chaos, but it surely has been hectic and fast-paced. With all the scheduling, drills, trainings and professional development it can be challenging to find time to sit down and reflect on what has happened.

A few weeks ago I made my first day plans. The plans indicated a number of different activities and beginning of the year strategies.  Here’s what actually happened:

I planned to have the kids for an hour, but that didn’t work out. Instead, I had around 30-40 minutes with my third and fourth grade classes. My fifth grade class was involved in expectations training so I missed their class on Wednesday. I ended up having students come into the classroom, find a seat, and use the “get to know you” and “get to know your teacher” activity. 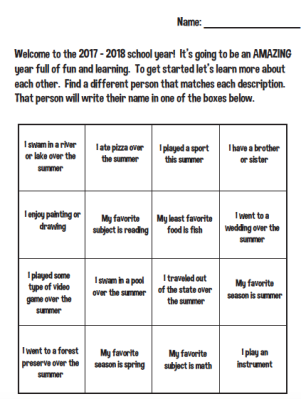 Both of these activities were great. Students caught up with their peers and learned a lot of new information about their teacher. Even though I’ve had some of the students for five years, many were left guessing.  Major Kudos to Sarah for sharing this idea. I’ll be using it again next school year. Even more, the students were straight-up giddy about creating a quiz for their teacher.

Students gave me a multiple-voice quiz about themselves. Feels like I'm guessing every answer. 🤔 They'll grade them tomorrow. #mtbos pic.twitter.com/vyOR7i9lEX

I ended up having a very short amount of time to review the arrival/dismissal flow charts. By then, the time was gone and students had to move to their next class.

During the second day I had students follow the arrival routine and sit in the same seats that they occupied yesterday. I randomly grouped students for their assigned seat for the first unit. Students graded their quiz and I was lucky to get a couple answers right on each page. I learned a ton about each student though.

The class moved into the Number Trouble game. Their new seats already grouped the students into table teams. I distributed the 100 paper to the teams and explained the instructions. Each group had two minutes to find all 100.

At the end of time every group found around 15-30 numbers. I gave the groups time to look for different strategies/patterns and create a plan. They were given an additional two minutes. Most groups had between 50-90 the second time around. One group made it to 100. I later found out that one of the members of the group used this activity last year.  Afterwards, I brought the classes to the carpet and we discussed what went well and what didn’t. The class created a list of positive behavior interactions and then that discussion spilled over into what the expectations should be for the school year. 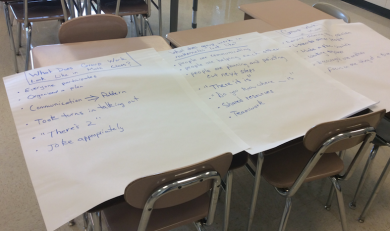 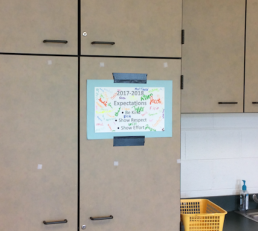 Students signed-off on the expectations and then went back to their seats.

I then introduced the name tents and feedback forms. Students wrote their names on the front and I explained what students should do on feedback side. Students weren’t quite sure what to write, but eventually they jotted down what came to their mind. Time was up after this activity and the second day was finished. Later that evening I wrote back to each student. 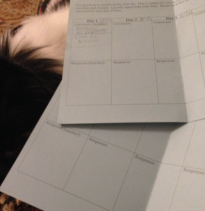 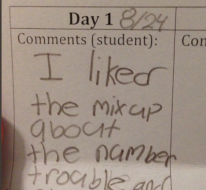 Students also started their puzzle piece. This is a bit different than in past years. Most students haven’t finished and that’s something that we’ll work on next week. We’re making progress, but I’m hoping when it’s all said and done, the door will be outlined with the student pieces.

This was my puzzle piece trial.  Eventually, each student will receive one puzzle piece and it should make a border around the door.  If any remain, I’ll most likely start filling in the border.

I’m looking forward to planning a few lessons and recharging over the weekend.