My fifth graders are currently studying rates and proportions. Earlier in the week they explored rates by looking at unit prices and solving problems with some type of cross-multiplication strategy.  Although they’ve made progress I still feel as some many still need to cement their understanding of a ratio and proportion. So it was time to switch up the instruction model.

I decided to go with using a spreadsheet. In this case, the spreadsheet would be in the form of an Excel document. Each student grabbed a laptop and opened up Excel. The students used Excel earlier in the year so they were familiar with some of the basic functions.

After entering a few text cells, students were asked to put a random number above zero in cells B4 and C4. Then the class discussed what GCD stood for. Most of the students said “greatest common denominator.” That response made sense because that’s heavily emphasized in fourth grade as students add and subtract fractions. In this case, GCD means greatest common divisor. The class then discussed what that meant when comparing two numbers and the helpfulness in finding the GCD when exploring equivalent fractions. The discussion then transitioned from equivalent fractions to finding ratios.

Students entered in the formula =GCD(b4,c4) to find the GCD of the two different numbers. Students observed how the GCD changed as they updated their numbers. 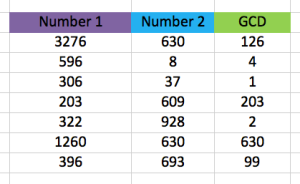 The next part was a bit tricky. I asked the students to write a formula to express the ratio in simplest form. The class used the GCD and trial and error to come up with the ratio formula. Once students wrote the formula and placed it in E4.  Students then explored how the ratio changed when their numbers were updated.

The class then reviewed why the formula actually worked.  The class discussed that basically the formula took each number and divided it by the GCD of both numbers. What was great was that students were starting to connect the reasoning behind the creation of a ratio. Instead of just cross-multiplying, students are starting to show a deeper understanding of how ratios are constructed and the process used to simplify. The students were able to save and print out their spreadsheets for later review.

Example for Class Use

2 thoughts on “Using Excel to Explore Rates and Proportions”