One of my classes started a unit on fractions around two weeks ago.  We explored the lowest common multiple and greatest common factor during the first week.  Moving on, the class investigated the different ways to multiply fractions.  Most students had an idea of how to find the products by multiplying the numerators and denominators.  They struggled when using visual models and also when converting fractions to/from a mixed-number form.  We spent a couple days reinforcing how to visualize fraction multiplication and created multiple models to show how to multiply a fraction of a fraction.  We used the folding paper method as well as free-hand drawing of different models.  On Thursday, the class moved to the next topic: fraction division.

I’d say that this is a topic that’s a bit confusing every year.  Many students, and I mean almost a third of my class tend to come into the class with an understanding that when you divide, the quotient will always be less.  This is one of the tricks that expire.  So, as I started to plan out what I was going to do during the introduction, I had to keep in mind that this topic has the potential to be  a misconception minefield.

Students worked in pairs with one device to find a solution.  Some groups immediately started splitting up the fractions.  The confidence from these groups seemed to be high.  Other groups were discussing what was meant by the visual model.  Here is one of the initial responses:

It was interesting as some students wanted to split the entire three sections in half.  This had me wondering if the students understood that each block was one whole. I also had some students that were able to find a solution, but it had to do with using the trick and not the visual model.

When pushed to explain their thinking the students weren’t able to move past the process of finding the reciprocal of the second number and multiplying.  The class then moved to the second question.

Students seemed to be more comfortable with the problem.  They were also a bit more careful when splitting up the shapes.  I reinforced with the class that idea of dividing fractions.  The responses showed more detail this time around. 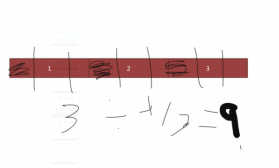 All of the responses used some type of a visual model, which was a positive as this didn’t happen as much the first time.  When asked to explain their reasoning, students were able to tell me with confidence why the model made sense.  Also, some of the students started to find that that they could check their answer with multiplication – 3 ÷ 1/3 = x , then x * 1/3 = 3. There were still students that went to a default of using the trick to find the quotient.  The third problem was designed to see if students could stretch their understanding.

Students took more time with this model.  Most of the groups started to divide each whole into thirds.  That’s when trouble started to brew.  Students counted up the wholes, but noticed that parts were still missing.  There were a lot of questions here.  I asked students to take a risk and put their mathematical thinking out there so we can all analyze the responses.  The students submitted their ideas and I noticed that the answers were all over the place. 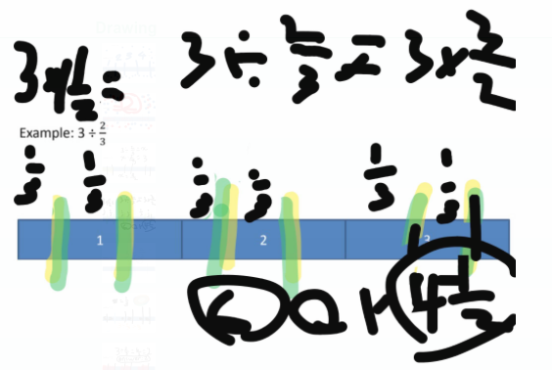 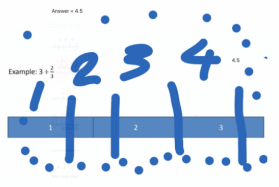 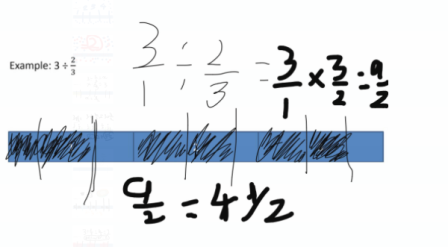 The class noticed that all of the groups split up each whole into thirds.  The groups also shaded in or indicated two thirds of the whole. Students also noticed that some of the third shapes weren’t included in the quotient.  There was a class debate on whether those thirds should be included.  Most of the students agreed and said that they’re part of the whole so they should be included.  This last question took up the most time and I think it was one of the better moments of the lesson.

There was only around ten minutes of class left, so students went back to their seats to work on a few more fraction division application problems. The struggle and perseverance to understand was evident and I’d like to find ways to incorporate this type of instructional routine more often.

Overall, I thought this lesson went well.  I recorded the entire lesson for my NBCT video, so it’ll be interesting to see how it turns out.  While watching the videos that I record I tend to remember instances where I could’ve done things differently.  In some of the cases, I could’ve asked better questions or model a bit less and have students make the connections themselves.  It’s a balance though.  I’d say that  watching a video of myself teaching is a humbling experience.  It’s humbling, but the personal reflections that come out of those experiences are worthwhile.  I think I could write an entire blogpost on that reflection process.  Maybe next time.

My third graders started to explore coordinate grids this week. For many, this was the first time that they’ve used them. Some of the students have played Battleship or some other game that involves a grids.  Playing off that background knowledge, I used a road map to show how people can find certain locations by using a coordinate grid. This made sense to some of the students but a few still were unsure of what axis was used first to determine where to plot a point.  This was a reoccurring theme throughout the lesson.

During this process I remembered a strategy that another colleague suggested a few years ago. She borrowed the idea from another teacher and it seemed to work well in her classroom. A colleague of mine used (3,2) as an example of the “go into the building” – first number (right 3) and then “go up or down the elevator” (up 2) method. I decided to use that strategy and a few more students started to grasp the process.  The next activity in the paragraphs below seemed to solidify a better understanding for the rest of the class.

Earlier in the day I created a very short Nearpod lesson involving mostly pictures of coordinate grids. I handed out a iPad to each student. Students logged in and given a picture of a grid and asked to draw and label points.

I then revealed the pictures to the class on the whiteboard. The names of the students were hidden so that we could analyze each response without throwing judgement lightning bolts towards a specific individual. As the class went through each picture they started to notice trends. 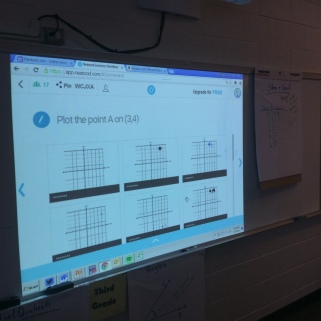 Students observed these issues from the first question and grid. After a decent discussion on the above trends, the class moved towards the second grid and question. I gave the students that same amount of time and the results seemed to initially improve.

Students started to become better at finding their own mistakes before submitting their creations. I used the same strategy as earlier and displayed the results to the class. There were a few that had some of the same misconceptions, but not as many. In fact, many students vocalized the class improvement since the last question. One of the evident misconceptions revolved around students having trouble plotting negative numbers on the coordinate grid. The class discussed this and completed the third question and grid. The student responses from this question were much better than the prior two. Students were starting to develop some true confidence in being able to correctly plot points on a coordinate grid. I kept a list of the trends that students noticed and will bring it out later in the unit as we’ll be revisiting coordinate grids next week.

After our Nearpod lesson (which was about 15-20 minutes) students played a Kahoot on identifying points on a coordinate grid. I felt like this was helpful as students identified the points and were able to gauge their own understanding compared to the goal.